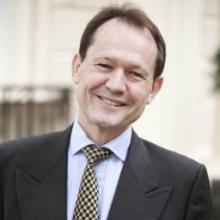 Simon Walker was, until early 2017, Director General of the Institute of Directors. Simon previously served as Chief Executive of the British Private Equity and Venture Capital Association from October 2007 to March 2011.

Between 2003 and 2007 Simon worked at Reuters as Director of Corporate Communications and Marketing. He was Communications Secretary to HM The Queen at Buckingham Palace from 2000 to 2003 and earlier served as Director of Corporate Affairs at British Airways. From 1996-1997 Simon worked as a special adviser in the Prime Minister’s Policy Unit at 10 Downing Street. He is currently lead non-executive on the Board of the Department of International Trade, as well as Chairman of the Global Network of Director Institutes and adviser to a number of UK and international businesses and organisations. Simon was born in South Africa, and has worked as a journalist and consultant in New Zealand, Belgium and the UK.