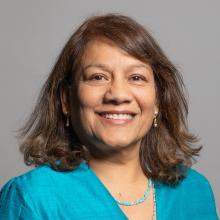 Valerie Vaz is the Labour MP for Walsall South. She was born in Aden and her family re-located from Yemen to the UK when she was ten years old.

Qualifying as a solicitor in 1984, she has worked as a lawyer in local government in London Boroughs, set up a community law firm Townsend Vaz and sat as a Deputy District Judge. From 1986-1990 Valerie was a Councillor in the London Borough of Ealing and was Deputy Leader in 1988-1989. In 2001 she joined the Government Legal Service and has worked at the Treasury Solicitors Department and the Ministry of Justice.

Valerie served as Shadow Leader of the House of Commons and member of the Shadow Cabinet from October 2016 to May 2021.

In October 2019 Valerie was appointed a member of Her Majesty’s Most Honourable Privy Council and received a Hon Doctor of Laws from the University of West London. In 2022 Valerie was appointed to the UK-EU Parliamentary Partnership Assembly, and became a Governor of the Westminster Foundation for Democracy.