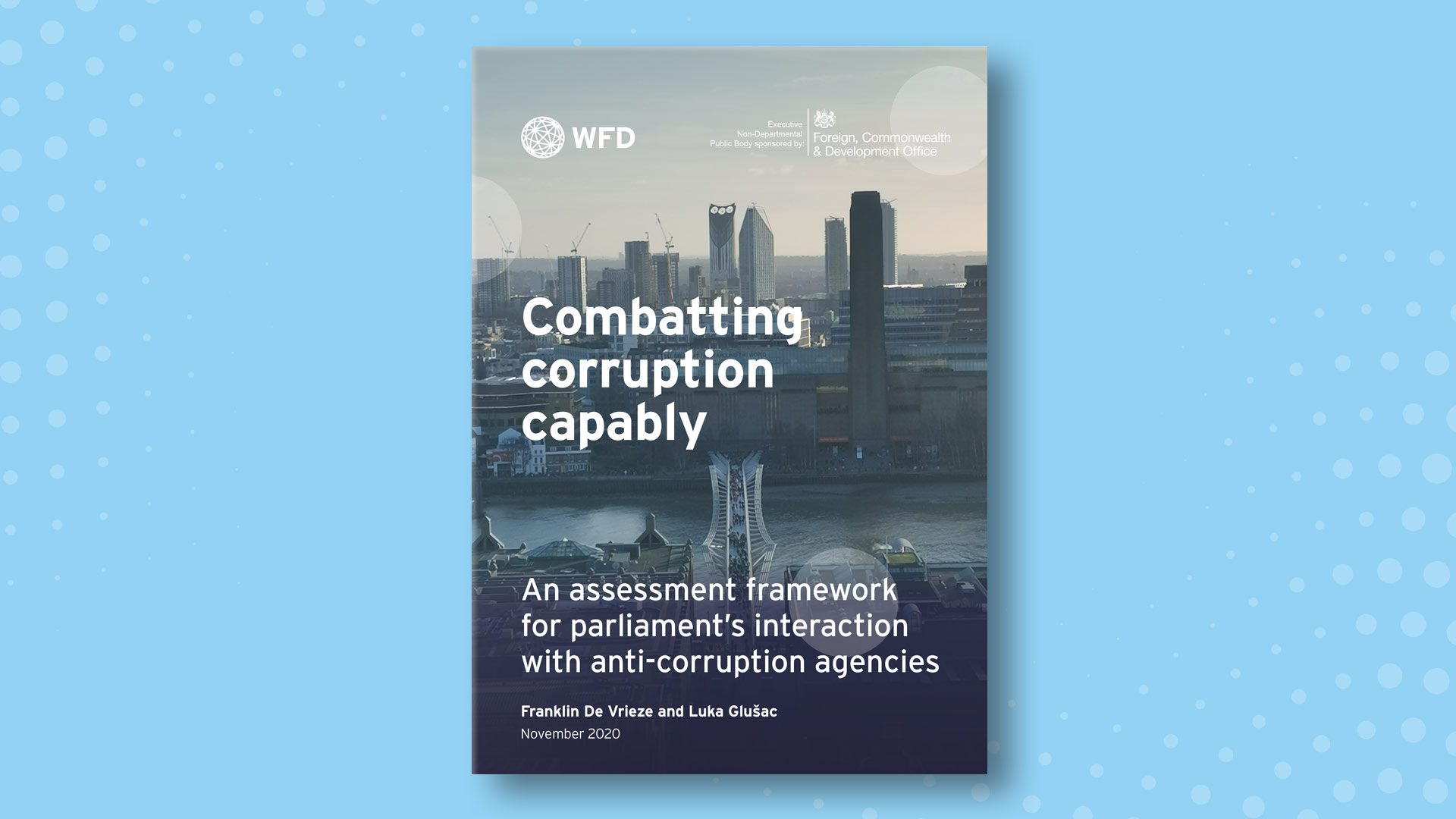 When the UK government published its Anti-Corruption Strategy 2017 to 2022, global corruption was recognised as having far-reaching effects, including prolonging extreme poverty, reducing economic activity, growth, trade and investment, and threatening international security. The World Bank’s analysis reinforces this, and there is no doubt that corruption is corrosive in many ways.

Today, there exist more than 150 specialised anti-corruption agencies (ACAs). However, the creation of such institutions is not a panacea to the scourge of corruption. In some instances, ACAs have been a disappointment and their effectiveness has been questioned.

In response to this disappointment, WFD’s Senior Governance Adviser Franklin De Vrieze and Luka Glusac have published a new report, ‘Combatting Corruption Capably: An assessment framework for parliament’s interaction with anti-corruption agencies’. This publication provides one avenue (among others, undoubtedly) to remedy.

Its purpose is to highlight the constructive role of parliaments in overcoming the challenges ACAs often face. It provides an insight into parliaments’ role in contributing to combatting corruption by exercising their legislative and oversight role in support of the effectiveness of ACAs. To ensure that parliament’s relationship with ACAs is constructive for anti-corruption efforts, that relationship needs to be clearly defined in a way which is measurable. That is the aim of this publication.

While there is a rich body of literature on parliaments and parliamentary development, and an increasing number of research outputs on ACAs, surprisingly little has been written on the relations between these two actors. Given that ACAs should be independent, particularly of the government of the day, it is a country’s parliament that holds responsibility to provide them with a strong mandate, guarantees of independence, security of tenure, and to hold them accountable for their activities.

The report concentrates on the aspects of the relationship that can illuminate whether a parliament performs these responsibilities in a proper manner, and outlines a framework for assessing parliament’s relationship to ACAs that is based on five criteria:

These five criteria (instruments) are then applied using 26 indicators, creating a comprehensive framework to understand the relationship between parliaments and ACAs, both theoretically and in practice. Furthermore, this assessment framework seeks to identify a way that optimises the equilibrium between independence and accountability because essential points of contact between parliaments and ACAs include elements of both of these functions.

This assessment framework may be useful to researchers and parliamentary assistance and international development programmes to:

As with other similar assessment exercises, it also serves to assist in the establishment of baseline and key benchmarks, taking into account the specific local context. Informal practices and customs elude any formal assessment framework. Thus, when applying this framework, one should contextualise their assessment within the wider political, cultural, social and legal processes, and the stage of democratic development of a given country.