WFD study: young people in North Macedonia are largely dissatisfied with their place in the society

WFD study: young people in North Macedonia are largely dissatisfied with their place in the society

On 16 May 2022, the Westminster Foundation for Democracy presented the findings from its latest study on socio-political participation of young people in North Macedonia. The findings show that half of young people (51%) take initiative to solve certain social problems, but only one third manage to often solve the problems they engaged with. One third of the respondents (34%) believe the country is farther from the EU perspective compared to last year. Almost half of respondents (45%) believe the country will become an EU member state, which is a drop of 15% compared to 2019. Half of young people (57%) rarely or never follow political events and developments in the country. Young people with disabilities are facing greater challenges in increasing their participation compared to the general youth population. 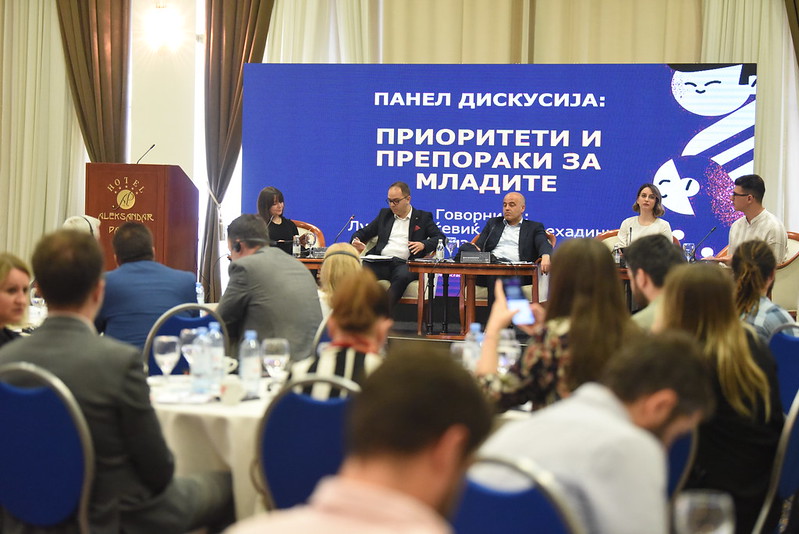 The findings from the research show the latest positions of youth regarding participation, position in society, future of the country, institutions, migrations, the impact of the pandemic and tolerance.  Young people rate most of the social stakeholders with below average grades regarding their work benefiting young people. The highest ranking, by a small difference, are educational institutions (2,5) and high-school and student bodies (2,45). When asked about priorities at local level, young people believe that the priorities of municipalities should be employment (22%), and next on the list are education (15%), infrastructure and public transport (14%) and environment (14%).

The research was conducted in November and December 2021, on a nationally representative sample of young people, ages 15-35. This is the third annual research that WFD conducts on the topic.

The research was promoted at a public event, attended by Prime Minister Dimitar Kovachevski, where three young activists presented their recommendations. Rita Behadini, Deniz Selmani and Luka Pavikjevikj presented recommendations of participation of students in education, political education, investing in young people from rural municipalities and smaller areas, combating discrimination against marginalized groups, and other ideas for the improvement of the position of youth in the country.

The Prime Minister stated “For young people to be satisfied, we should work on rule of law, economic and social standard, equal opportunities and protection of the environment. We have a responsibility to the future generations to leave a better place to live”.

WFD’s Country Representative in North Macedonia, Damir Neziri, stated that only though complete and thorough implementation of the Law on Youth Participation and Youth Policies, the participation of youth on national and local level can be improved. Though this interaction between youth and institutions we can improve the trust between them. Julia Smyth, Deputy Head of British Embassy in North Macedonia also addressed the event and reflected on the finding emphasizing the need for a National Youth Strategy.

Other recommendations include the preparation of the National Strategy for Youth and increased funding from the state budget for youth policies. Local self-governments should establish local youth councils and open youth centers for more opportunities on local level. Guaranteeing high-school participation though legislation and establishing student assemblies in all faculties, are some of the measures to improve the current situation. The importance of the Parliamentary Club for Youth Affairs and Policies was also emphasized as a way to improve youth representation.