Overcoming the Challenges to the Effective Implementation of the Violence Against Persons Prohibition Act in Nigerian States
These policy briefs give an update to the status of the uptake of the VAPPA by the 36 states and provides information on the current status of the Law in each state specifically.  They are aimed at guiding decision makers and relevant stakeholders in facilitating effective engagement towards successful implementation of the law in the state. 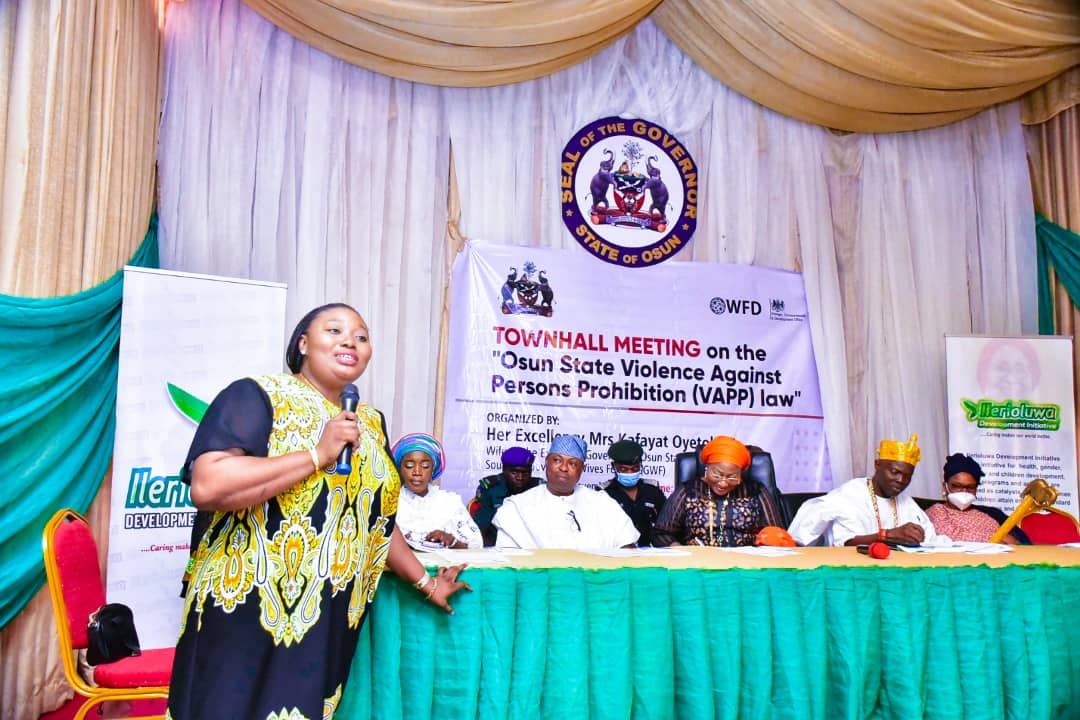 Violence against women (VAW) is defined as “any act of gender-based violence that results in, or is likely to result in physical, sexual, or psychological harm or suffering to women, including threats of such acts, coercion or arbitrary deprivation of liberty, whether occurring in public or private life”.2 It has been identified as the most pervasive human rights violation in the world, and it is estimated to cost countries up to 3.7% of their GDP – more than double what most governments spend on education. An offshoot of gender inequality, violence against women is a significant cause of female morbidity and mortality, may be physical, emotional, sexual, psychological, or economic harm, and it takes place in the private or public arenas, affecting 1 in 3 women in their lifetime.

Considering Nigeria’s estimated female population of over 106 million as of January 2022, that translates into about 35 million women. Recent happenings such as the lockdown caused by the COVID-19 pandemic further exacerbated the cases of violence against women, particularly sexual violence. The UN brief of May 2020 revealed that during this time, the increase in reports of domestic violence cases in April 2020 was more profound in three states under total lockdown (Lagos state, Ogun state, and the Federal Capital Territory). The number of cases rose from 60 in March to 238 in April, an increase of 127%. Furthermore, women and girls are disproportionately affected by insecurity – Boko Haram insurgency, banditry, kidnappings, herder-farmers conflict, armed robbery, and so on – and an estimated 79% of internally displaced persons are women and children5,  who are also “targeted for abduction by Boko Haram and are often raped, forced into labour, marriage, or religious conversion, abused, exposed to sexually transmitted infections and are often pregnant upon escaping captivity.”

The Violence Against Persons (Prohibition) Act (VAPPA) is the most comprehensive and progressive law for addressing the silent pandemic of violence against women and girls in Nigeria. The main thrust of the VAPPA is to “eliminate violence in private and public life, prohibit all forms of violence against persons and to provide maximum protection and effective remedies for victims and punishment of offenders; and for other related matters”. It guarantees maximum protection to all citizens by prohibiting all forms of violence and harmful traditional practices against women or men, boys or girls occurring in private and /or public spaces.

The Act is the first criminal legislation which expanded Nigerian criminal jurisprudence by recognising various forms of related crimes hitherto unacknowledged. Accordingly, the definition of rape was expanded beyond penetration of the female genitals and mouth, to forced sexual action on a male. It addresses a broad-spectrum of violence - physical, verbal, emotional, sexual, economic, and psychological abuses, as well as discrimination against persons, particularly women and girls. These include child abandonment, rape, incest, defilement of minors, forced eviction of a spouse and children, harmful widowhood laws and practices, female genital mutilation (FGM), forced financial dependence, attacks with harmful substance, political violence, among others. It also sets appropriate punishment for convicted perpetrators. For instance, the offence of rape may attract life imprisonment, subject to the circumstance and the discretion of the judge. The offender will also be listed in the sexual offenders’ register as a deterrent to others. Similarly, the Act makes provisions for effective remedies for victims of violence – rehabilitation support, and compensation, among others. According to Section 38 (1) of the Act, victims of violence are entitled to material, medical, psychological, and legal assistance from governmental and non-governmental agencies providing such services. Additionally, they are afforded opportunity to acquire skills in any vocation of their choice and access to micro credit facilities.

Since it was enacted in 2015, the Act has the force of law in the Federal Capital Territory (FCT) and in twenty-three (23) states across Nigeria where it has been adopted into law.

The Act recognizes as punishable a wide range of sexual and gender-based violence (SGBV) offences including forced financial dependence or economic abuse, harmful widowhood practices, genital mutilation, abandonment of children, harmful substance attacks, and incest. Furthermore, due to its all-encompassing nature, the Act does not just protect women and girls from violence, it can also be used to improve the participation of women in politics and other positions of power.  This is because violence and discrimination are amongst the reasons why women get excluded from politics and other aspects of public life.

Prior to the enactment of the VAPPA, there was no comprehensive legislation on violence against women at the national level. Nigeria only had disparate pieces of legislation, which did not address violence against women or gender-based violence uniformly across the country. A few states had passed legislation on domestic violence, harmful traditional practices, or gender-based violence. A few others had attempted to do so unsuccessfully. Much of the existing legislation was outdated, not sufficiently comprehensive, not specifically directed to this grave problem, and not adequately enforced. The coming together of more than fifty-five (55) different groups and individuals under the umbrella of the Legislative Advocacy Coalition on Violence Against Women, (LACVAW), eventually helped mobilise action to improve the legislative landscape for violence against women in Nigeria in 2002. The result of that activism was the signing into law of the Violence Against Persons Prohibition Act on May 25, 2015, after about thirteen (13) years in the legislative process. The National Agency for the Prohibition of Trafficking in persons (NAPTIP) is responsible for overseeing the implementation of the law at the Federal Capital Territory (FCT), Abuja.

These policy briefs give an update to the status of the uptake of the VAPPA by the 36 states and provides information on the current status of the Law in each state specifically.  They are aimed at guiding decision makers and relevant stakeholders in facilitating effective engagement towards successful implementation of the law in the state.